Laughing and Learning More About
the True Tales From Jerry's Life

Today we have a special guest with us, Jerry Zucker (above).

Jerry is the co-creator of "It's Jerry Time", a web video series which presents "true tales from Jerry's life". I am excited to be interviewing him today for a couple reasons.

So get comfortable, as we get to know the man behind Jerry's voice...Jerry.

1) Who is Jerry Zucker? What qualities, accomplishments and general information should others know about you?

Jerry Zucker: I always thought I was born in the wrong era. I should have been a Tin Pan Alley composer or a vaudevillian.

I’ve always wanted to make a living doing something creative using my music and humor. I think I've succeeded to a point, although things have never come easy for me, which is the theme of the Jerrytime series.

My most recent project was to produce a soundtrack album of all the Jerrytime musical themes. I worked with a very talented engineer, Steve Rizzo in Newport, RI, to add instrumentals and vocals. The CD is available on Amazon, and soon to be on itunes.

My long-standing girlfriend is a very creative person who has stood by me through the storms of life. I have about ten or so very close friendships that go back decades. The wonderful feelings my friends give me, have been the joy of my life. I try to have a balance between the intellectual, spiritual and physical. I have a passion for music, movies, hockey and creme-filled donuts.

Jerry Zucker: JerryTime is a word I invented, when I was writing and performing a private comic radio show in my room at 14, doing silly stories and strange noises.

When Orrin and I first did our pilot episode "Who's That Guy!?" decades later, we were looking for a name for our web series. I agonized over the right name. After about 100 tries, my brother remembered JerryTime, and I immediately knew that was it.

Its JerryTime is about the little annoyances of everyday life. Orrin has created brilliant animation and added sardonic humor. I tell the stories and play the music.

Its JerryTime! is very much like Charlie Brown lining up to kick the football, running up to it and Lucy snatches it away at the last second, sending poor Charlie flying.

3) Which is your favorite “It’s Jerry Time” video and why?

Jerry Zucker: I think the one that started it all, Who's That Guy!? There is a certain spark that comes with the introduction of something and the momentum that follows. The immediate feedback from that first episode was thrilling. Jerry the character was born fully-formed in that episode.The basic theme of people not being nice to each other was something that many people could relate to.

4) Do you speak any languages other than English? Did you find it difficult to learn them? If you don’t speak another language, what do you think would be the most difficult part about learning one?

Jerry Zucker: I speak French, and to a lesser extent Hebrew. I took French in High School and was pretty good at it. I went to "AP" French (Advanced Placement) and we studied literature like Baudelaire that fascinated me.

I've never visited France but have been to Quebec several times, where I try to speak the language. The natives seem to be amused.

I was fascinated with French because of the culture and my teacher was a real babe! I play music so I have an ear for sounds...plus I'm a good mimic so becoming a different person, forming different sounds, is something that interests me.

To me, the most difficult part of learning is the mechanics, the grammar, and the constant need for correct structure. I think it's easier if you're immersed in a different culture for awhile in order to really become fluent. And if you're interested in something you'll find a way to learn it.

The more you do it, the better you get.

5) Do you think you have an accent? How would you describe your accent or style of speaking?

Jerry Zucker: I’m from the city of Buffalo, NY but have lived in New York City, Chicago and now Boston. I think I have a slight mid-western accent.

Chicago has a similar accent to Buffalo with the hard "A's"-- like AAaaple. A Boston accent (I don’t have one) is the “pahhhk the cahhh in hahhvard yahhhd” sound and a New York accent is similar to Boston.

I try to say things efficiently. I’m expressive and use colorful language. I think I notice things quickly and will sometime describe things other people don’t notice. I hate boring stories.

6) What was your reaction when I contacted you about using your videos as a basis for an English course?

Jerry Zucker: I was so flattered that someone would take my stories as an example of how an ordinary American speaks and use them to teach people who don't speak the language.

That's really the way to learn a language...to learn to express your thoughts in the most simple and interesting way.

I could understand why people might like the JerryTime animations. When I was taking French, we followed a cartoon character named "Monsieur Thibeault" that I still remember.

I think the offbeat stories in Its JerryTime might motivate students to try understand what’s going on.

This is exactly why I wanted to create "It's English Time", an English course that makes improving your English interesting and fun. Click here for more details. 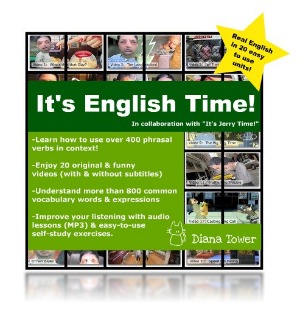 7) How would you describe the English you use in your videos (formality, types of vocabulary, usefulness etc).

Jerry Zucker: I originally went over to my friend Mark Wuerthner’s house and told him my stories while recording it so the type of English I use is the language of friends. It's not perfect but it's very careful and designed to be interesting and entertaining. The style is mainly emotional and I use pauses like the words "like" or "um" when I need to think about of what comes next. I improvise rather work from a script.

I take my experiences and make them into theatrical productions.

8) How do you think your videos can help English learners?

Jerry Zucker: I think the language, stories and characters will engage them. The music holds the stories together. The creative animation dramatizes the stories. It's less formal but more compelling. If you look between the lines, it's very revealing about the American culture.

9) Could you walk us, step-by-step, through the process of making a video (describing how you get the idea, planning, execution, recording, animation,music etc)?

Jerry Zucker: I agonize over getting things right. I find that the memory of a slight, a humiliation or a feeling is what puts me on the right track. It has to be a good basic story and there has to be a certain feeling with the storyteller. With me, the feeling is usually outrage because the experiences are true to life.

I'd usually record myself telling the story to a friend, which makes the tone friendly and conversational. Sometimes I told stories by myself and spliced the best parts together.

My brother improvised the animation, which is amazing. There were no storyboards or planning for any of these episodes. We did it all "seat of the pants."

I usually took a week or two to record the stories and edit them. Orrin took about three weeks to animate the episodes and then I'd add the music. At the end, we added sound effects.

10) Can you tell us a story? Maybe an embarrassing moment or frustrating situation where you were misunderstood.

Jerry Zucker: Once I had to pee really badly but there was no bathroom. I finally found one and desperately did the act. By mistake, I stained the front of my pants. I didn’t have time to change and had to go to a haircut appointment. So I un-tucked my shirt and walked hunched over. Nobody said anything, so I don't think they saw it. But who knows?

11) Anything else that you would like to share with us? Maybe a quote, joke or just knowledge that you have picked up somewhere?

Jerry Zucker: I love the quote by a favorite old-time comedian Lord Buckley (said in a very regal British accent)

"If you get there and you cannot do it, there you jolly well are, (whew!) aren't you!"

Thanks Jerry...for the quote and taking the time to talk to me today.

I also want to take this opportunity to thank both Jerry and Orrin for making these videos and for allowing me to base "It's English Time!" on them.

I truly believe that this new English course, "It's English Time" is going to help so many English learners, from all over the world. :) - Diana

A big thank you to Jerry Zucker for taking the time to speak to us today.
For more interviews click here.

What do you think about this page? Leave me a comment in the box below.